Wow. I found it. I thought it was lost. 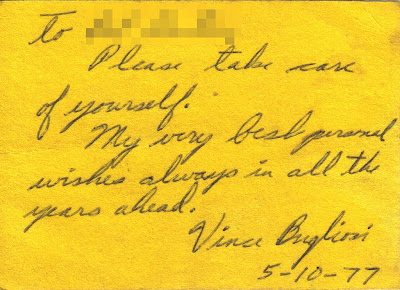 I had a friend in back in the day who had some serious problems that were eventually overcome, but at the time was in the midst of it and to them, Bugliosi was a hero. He is to me now. So when I heard him speak, I went backstage for an autograph. Bugliosi was warm and understanding and took the time to write this. The guy who would put Dubya in jail for murder, caught Manson and proved a lone gunman. A living national intellectual treasure. The friend never got it, for separation occurred shortly after, and I never saw them again, but a wish to pray is the same as praying they say. That is, if you pray. You get what I'm tryinta say - don't be so snarky, it was a nice gesture.