"Hi
Through a Google search we found some great images on your site www.glyphjockey.com and wondered about conditions of using images as outlined below.

My colleague and I have an organisation (in Melbourne Australia) that provides training for workers and families with a person with brain injury.

Some of the images on your site would be perfect to illustrate aspects of working with people with brain injury. If we were to use it we would use it on a Power point slide and in handouts provided to participants attending our workshop.

Can you shed any light on whether we are able to use the images and what conditions there are on use.

Look forward to hearing from you
Regards"

Need I elucidate that when someone finally has a legitimate use for my images it's to help illustrate aspects of working with people with brain injuries? While I am happy to help, and kudos to these folks for choosing such a challenging field, the irony is not lost on me.
From Your Pal glyphjockey at 8/28/2009 10:09:00 AM

Wallpaper link at pic below.

So enjoy these better examples of his work forwarded by Gary Lee-Nova. Two things - all images link to giant versions and the last is especially rewarding, owing to the more easily visible pasteup technique:

WV Hearts GJ - this week only

Bizarre trippy and loads of fun - not unlike - one would would imagine - Paula Abdul. While I feel I present loads more content than old comics, I'll accept whatever column inches I can lay my little insecure grubby virtual hands on.

I had a chance to visit Oakland Public Libary's TOOL lending library....yes, that's right, tools. Need an 11/16th spade bit (great for old school xmas light base holes- don't ask)? Break out your library card.... How about a half-round bastard file? Right this way. Stilson wrench? no problem. Spirit level? Yep. Can you cope with a coping saw? (for the record, I just listed those to be lingusitically clever) The rooms are well organized (by Ty, librarian in charge of the area - his favorite food? Thai.) in a vintage Carnegie Library building's rear entrance at the Temescal Branch.

Libraries are the last bastion of a true society here in the U.S.; everybody wants to support education, then bitches about the cost. We have little or no free college, we have no public health care, we underfund other non-commerce-based public works, but everybody, it seems to me observing people in libraries across the U.S. uses the library. It's the great independent study resource. Often they are underfunded, too, but the folks who run them still manage to provide solid reasonable frou-frou free (like that one?) lending services like this tool library, which ultimately serves the public at large well by facilitating repair and/or creation of.....whatever.

And it turns out that there's several in the US. Many in the I-wish-I-lived-there Bay Area.

As it turns out BC artist Gary Lee-Nova shares an admiration for one of the artists that provided me awe when I was a youth (along with Oldenburg, Kienholz, Yokoo, Rauschenberg, Mel Ramos et al.....) Jess.

It's difficult to find examples of his work online, but below are a couple most notably one of the Tricky Cad 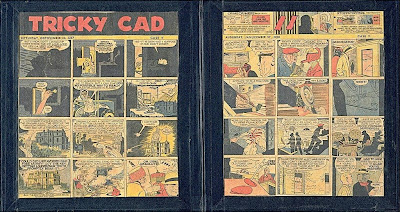 click above 4 McHuge
"pasteups" Series (I got to see a real one, up close, at the Art Institute of Chicago years ago. Wow.) Now that art is dead, (I mean seriously, at this point in history a buncha millionaires collectively deciding anything NEW is worth a lot of money is just insane and they can all get advice from overpaid bullshitting experts in their little masturbatory money wasting clubhouse, while the rest of the world creates art for everybody.) I figure I can offer my view with the best of them - and that's all I'm doing - opining. Folks say he was proto-pop (using comics as a medium prior to Lichtenstein's use of single panels) or post dada (his syntactical structure freeing the eye in the talk balloons of the Tricky Cad series) but I say alot of his non-Tricky Cad work 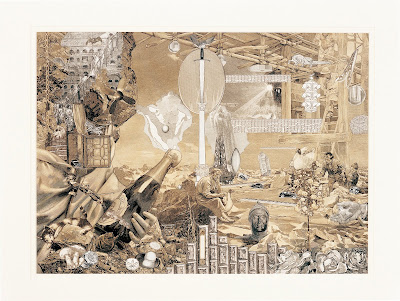 click above 4 McHuge
also prefigures Robert Williams, (even though I don't know if Williams ever even saw his work) too, so he might be the Grandaddy of outsider art as well. Or it's all just synergy x zeitgeist = WTF.

But creative concepts can lie dormant like bacteria on the lunar lander camera or in a bee's gut in amber, only to be revived through a parthenogenesis that lets artists, once they know it's OK for an idea to thrive, to produce work relating to it - so back to Gary, who has worked on a series called Uncanny Old Gags, which remixes Nancy comics with results that while not directly related to Jess' work is equally interesting. He has greenlighted me sharing these here and has shown me some NEW works which seem as compelling if not more..... so here's 4 pieces in a combination of pasteups and silkscreens (Correct me if I'm wrong, Gary) using his current idiom of remixed comics - 2 are entitled Uncanny Old Gags, which I will restate is an anagram of Nancy and Sluggo.

So-
Here are the works:

Bonus: here's a link to a book on Jess

I was eating cherries (northeastern) and found a strange object opposing my left rear molars. When I spit it out, I discovered, as far as I can tell, that it was birdshot. Possibly #9?