I was watching the playoffs a little and I told my wife "I want one of those hats!" Y'know, a blue hat with a red bill, and that cool Indian logo on it. My wife reminded me that the hat was reprehensible because it was racist. She's right. But that cartoon is so cool

Think about it, the Cleveland Indian Logo, which now is often seen as racist, has a subtext to it:

And not a "Hey what about, 'I will fight no more forever'?" in sight, Nor a "They are enigmatic..." Also a dearth of "Our founding fathers borrowed from the Iroquois for the Constitution!!!" 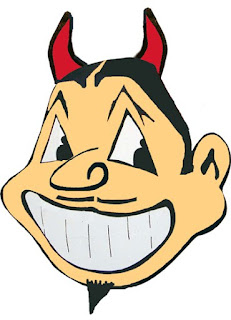 Now, think about it-