I got this tattoo centuries ago, done by my presumably outlaw biker buddy Jack, also known as Boneshaker. An all around talented guy, but things being what they were in those days, and his at-the-time amateur status, it didn't really have stayin' power.

I was on, like, a second date with a girl and I told her I got it for her as a goof - she was not hip to my mirth and became instantly concerned that "it was too soon", which in turn colored my attitude toward the dumb broad. Permanently.

Two days later I went to my sister's and went swimming. As I was about to hit the water in a perfect dive, I heard my mother scream WHAT the HELL is THAT?!?!?!? Had to surface eventually, but at least she ultimately was able to deal.

So, as you can see, it has faded, possibly has some anatomy associated balance issues, And my wife's name (which was added on our 5th anniversary) is barely readable (I shoulda walked out the second I saw that he dotted the "I" in her name with a heart.) My old signature above the heart (it bears no resemblance to that now) actually cashed me a check once.


I had stopped in two or three parlors in the past to see why this fading happened and what could be done about it. The first two in Ingnoramusadelphia, PA shithole of the universe/birthplace of the US, where firstly some oaf that wouldn't be happy unless he was piercing an ampallang with automotive tools (sorry asshole, I don't want to stab anyone this week, keep working on that scowl) and secondly, a parlor run by a group of ladies who maybe should have invested in a "NO MEN" sign. Who knew? It wasn't like it was called "Amazon Man Death Society" or anything, but it was evident that because I had an "outie" (or front tail, if you will)  I was not welcome. If I'm over interpreting, perhaps it was their clipped angry responses to questions while having clenched fists that confused me. 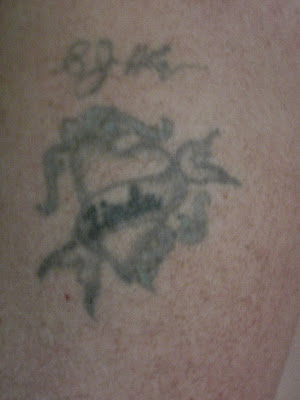 But as I was waiting to get in to see a band in a fake punk craphole in Fullerton run by people who make East Coasters look like Eloi, I took a walk and ended up in Big Buddha Tattoo parlor where I had an in depth philosophical discussion of the merits of treating my blasted little scar as an artifact of a time gone by where if the tattoo needle wasn't touching bone ya weren't doing it right. They also told me that the technique of using a "pork chop", a piece of clear plastic with the design scratched in it in reverse, then filled with activated charcoal dust and applied to the anatomy, had only gone out of use a few years back. They then told me I could just email them my concept and they'd do it.

They showed me 15 year old tattoos that looked like they had been done yesterday, and told me that while they could both repair and obscure the tattoo that I should hold it in esteem because it was old and had a story. I've got clients in Fullerton and hopefully Huntington Beach, soon, and told them that I'd be back to do something. 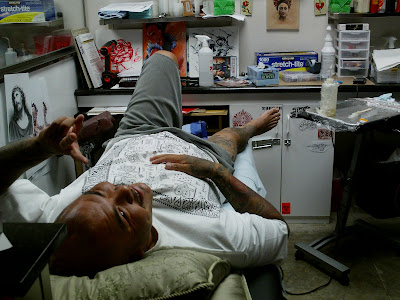 The guy on the left below is Sam Ngo. If he will allow me to jest, next time I'm there, I'm gonna get up n'go and see him. 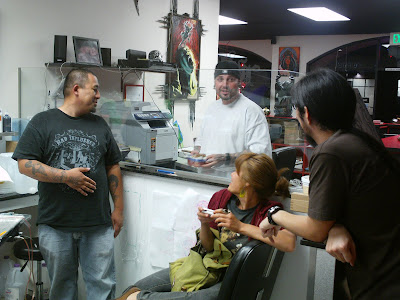