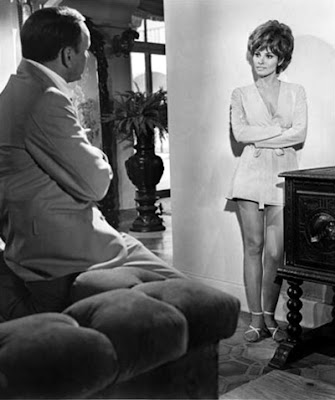 "Would you like a bullshot Mr. Rome?"
Since PCL's on a eentsy Sinatra jag & it's the 10th anniversary of the legend's death:

First of all let me say I love Frank Sinatra. Not his music, really, because I'm a closed minded jerk who is from the rock and roll era or later (It's OK music, but what am I, some kinda metrosexual Sopranos wannabe? Fuck no), but his movies. From Here to Eternity, The Man With The Golden Arm, Von Ryan's Express, Suddenly, The Manchurian Candidate, and my two top faves, Tony Rome and Lady in Cement......... I think they're all great.

But when I was a kid I used to just hate him. He was establishment, and a pig, and he came from a bullshit world that the new world order of peace and love would crush. ....Ah, yoot, as they say in North Jersey. Since then, as I continue to not croak, my mind has opened, like the ribs of a deer that has been hit by a car and is half eaten by buzzards while lying in the sun. Reluctantly, in a dessicated fashion, but allowing more access to those who insist I expose my delicious vulnerable underbelly. And like Sinatra - so now I do.

So, when I was first married, I read His Way by Kitty Kelly. I was shocked and pleased to read just how demonic an individual he really was, like a lone Roman orgiast, or a vampire. It confirmed my suspicions. Joey Bishop acting as apologist on Phil Donahue only helped. It was exquisite Hollywood Babylon-esque debauchery and decadence.

My mother in law, a new friend if you will, at the time, loved Frank Sinatra, and nearly worshiped the man. She refused to read or believe the book, and when we told her about this quote from Peter Lawford:

"one time at a party in Palm Springs he got so mad at some poor girl that he slammed her through a plate glass window. There was shattered glass and blood all over the place and the girl's arm was nearly severed . . . Frank paid her off later and the whole thing was hushed up, of course."