Ratzinger comdemned this sculpture, because - hey - that's what Popes do ! Well, that and advising third world Catholics not to wear rubbers despite rampant AIDS. He's obviously never lived in a wealthy white sururban community with Goth Teens and graveyards! 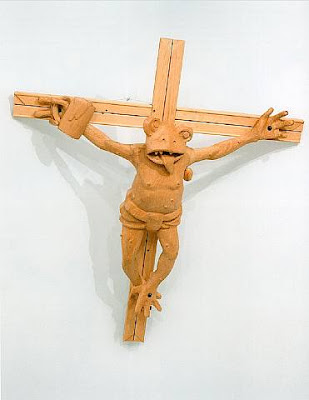 I gotta say, compared to Piss Christ and Manure Mary this is kinda lightweight, more like something and old lady would put in her garden so the froggies could pray.....

NYT has the tale of the toad headed for hell here.

Kippenberger's work, which I quite enjoy, (sort of a Yokoo/Warhol influenced pop based exploitation of reproduction methods, amongst other things...) can be found here at SFMOMA (quite tiny images, but hey, they kick photographers out now, so the usual care to display properly may have just gone by the wayside.)

1. Yeah I know it happened while back but nobody talked about it except the press and

Really this second one's about Frenchmen (Hey Phantom - everybody secretly want to be French!)