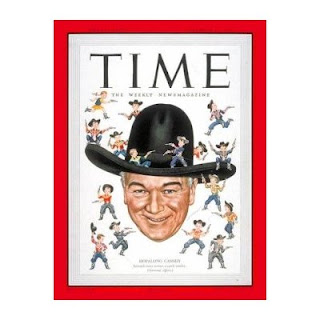 Okay, maybe I'm not Bibi, but I still am amazed at Archive.org as a resource. I'm reading Robert Mitchum - "Baby I Don't Care" by Lee Server, a bio of the undisputed king of calypso and sometime movie actor, most notably famous for his role as the killin' preacher in Night of the Hunter.

His first movie role was in Border Patrol, a Hopalong Cassidy film.

A couple of cool things:

When Mitchum arrived on the set, everyone was mourning an actor who had been killed the day before by having his head crushed under the wheels of a stagecoach he was driving in a scene. When Mitchum was issued his cowboy costume he noticed the interior of the hat was a little "crusty".... the prop man gave it a brushing and informed Mitchum it was the hat the dead man was wearing at the time of his fatal accident. Gruesome.

Server notes that the script was by Michael Wilson, who went on to write It's a Wonderful Life, A Place in the Sun, Bridge on the River Kwai Lawrence of Arabia and Planet of the Apes. Some list of hits, huh? Many of his scripts went uncredited because of a HUAC ban, and Server points to the content of Border Patrol- good guys busting up slave labor, as one of the contributing factors to his suspicion by the HUAC. Funny.

Lastly, and this is the coolest thing of all, it was there on Archive.org! You can own it for free...